Our very own Dr Chris Gaffney is on his way to London to attend the William Hill Sport Book of the Year ceremony. A couple of years ago Chris and Tom Sparrow trained some students in geophysical techniques on the former Bradford Park Avenue ground (together with assistance from Stuart Fox, Mary Saunders and Alex Corkum). Bradford Park Avenue was a club that epitomises so much of English football. They played at the top level during the hey-day of football but by 1974 their decline was terminal. Their fine ground was only saved as it had a covenant which stipulated that sports had to be played there. The interpretation of that clause is a bit vague, but half the ground is still there. The University of Bradford team mapped the pitch and laser scanned some of the terraces at the Kop end. The work was done with Neville Gabie, Alan Ward and Jason Wood who had Arts Council funding to work with the community to record the ground in some way. They produced an edited book, Breaking Ground: Art, Archaeology and Mythology,  which includes a piece about the UoB team’s work. It’s a lovely volume which was crowd funded and only 500 were produced. Somehow it got noticed by those who judge books…long-list and then short-list of the William Hill Sport Book of the Year.

The announcement of the winner will be later today. Good luck and fingers crossed for Breaking Ground: Art, Archaeology and Mythology. 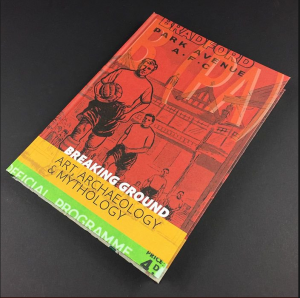 The book has been discussed in an article by The Guardian newspaper. You can find out more details of the William Hill Sport Book of the Year here.